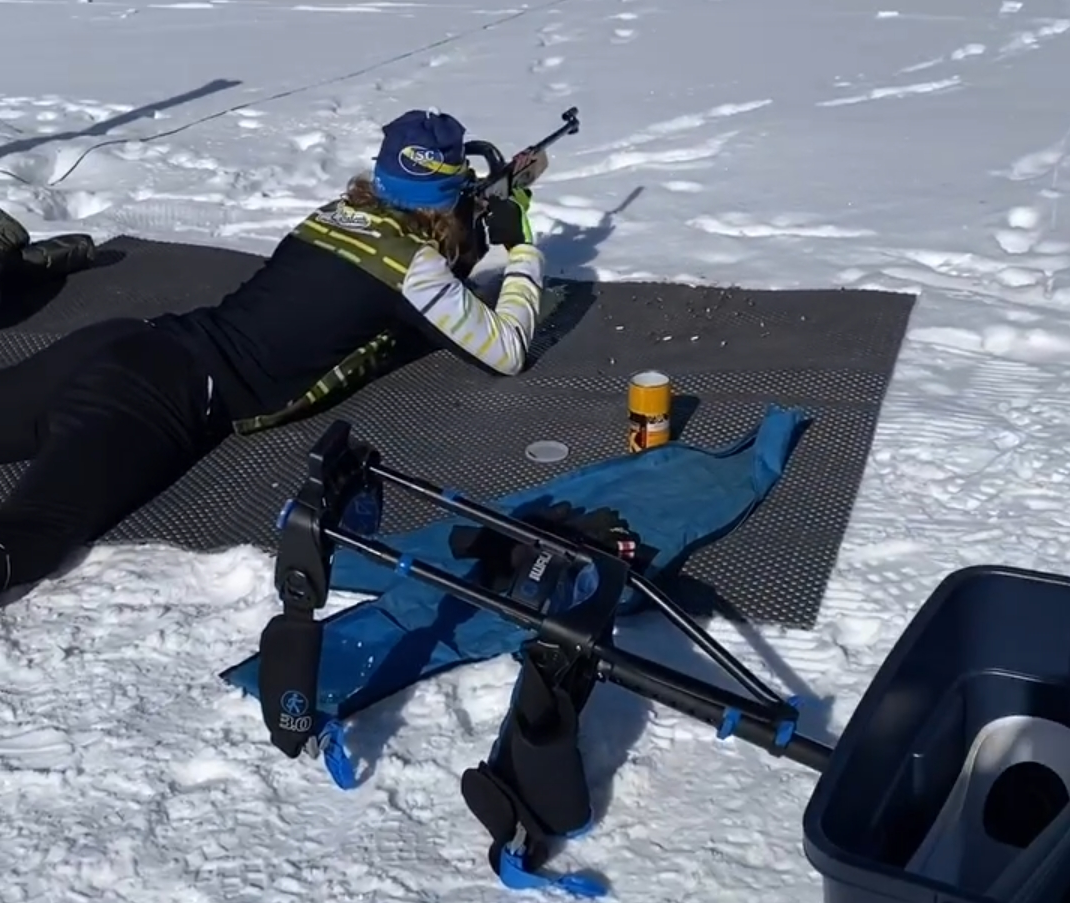 As I’m sure anyone who’s lived for a while will tell you, life throws a lot of lemons at you. Ski-specifically, life can throw more lemons at you than a desperate coach throwing Red Klister at some soggy snow. Sometimes they’re small, like getting a cold and having a bad week of training or racing. Or it could be more moderate like falling at the start line of 2019 Junior Championships. On very rare occasions however, you end up with a season-ending injury. Unfortunately, I did end up with such an injury, from a fall that at the outset looked pretty small and insignificant. For this week, and over the next few weeks, I’ll be shining a light onto the subject of recovering from such an injury: going through surgery, dealing with the post-op, and then hitting the road to recovery and getting back on skis.

At the Ski Jumping and Nordic Combined Olympic Team Trials on December 25, 2021 in Lake Placid, New York, I was a forejumper. I was excited to be able to jump with, but not compete against, the best ski jumpers and Nordic combined skiers in America who were all in the battle for a win, hoping to secure a spot on their respective Olympic team. As the day started, things were going well; I had been jumping better than I had expected given the low start gate (which translates to less speed so it’s challenging to jump as far). People had been filing into the lower viewing area for a couple hours, and now there were a good few hundred spectators ready to watch the Olympic Trials take place. 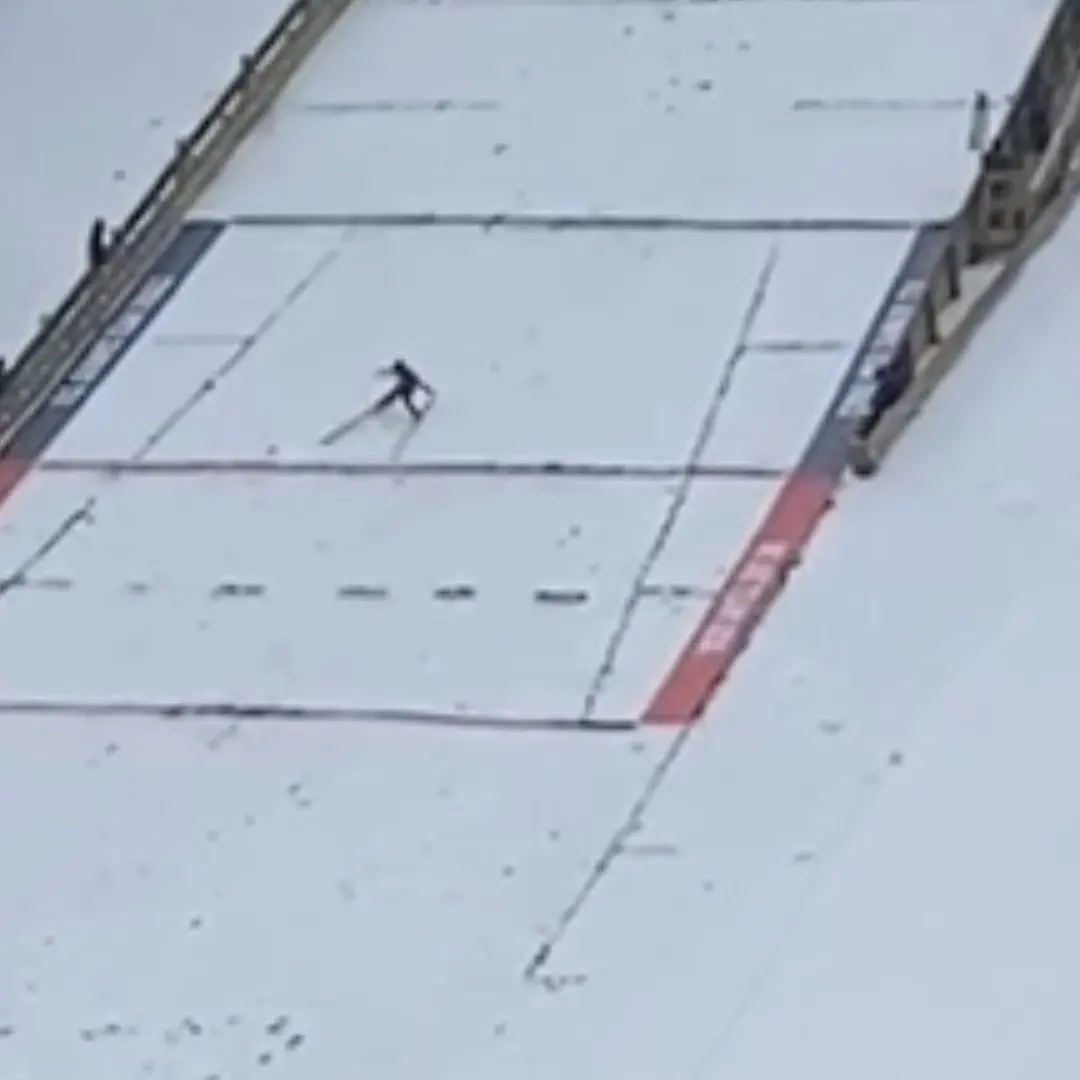 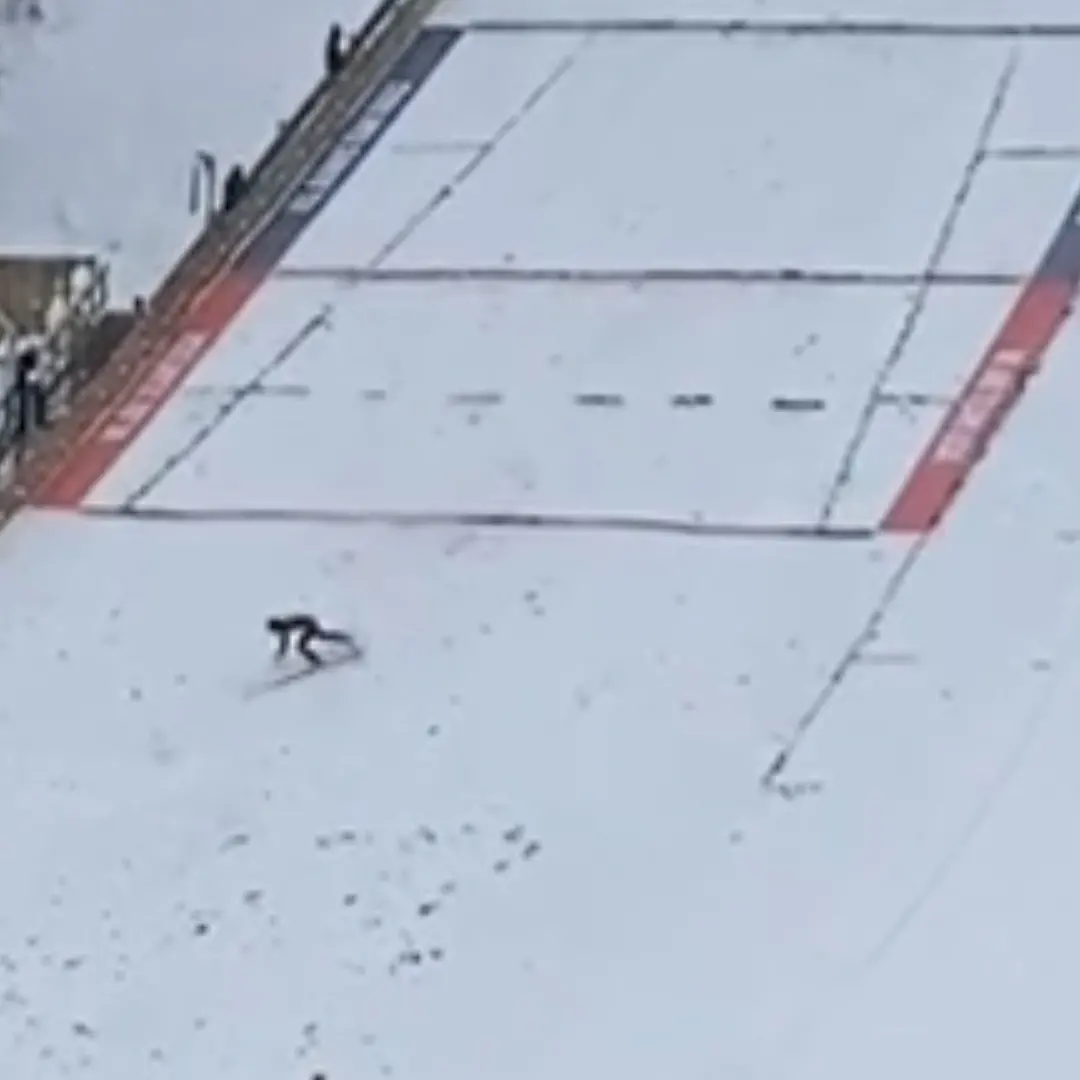 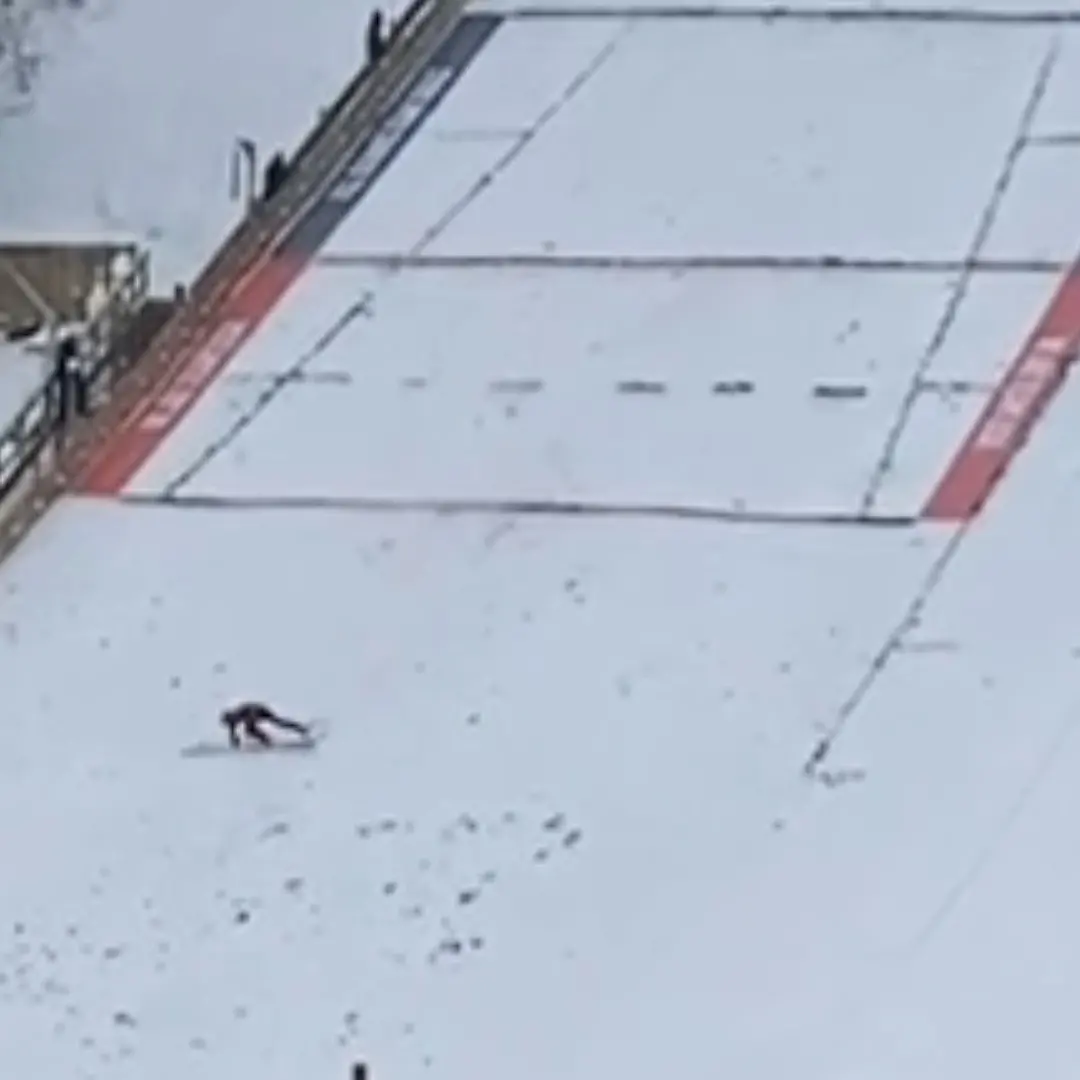 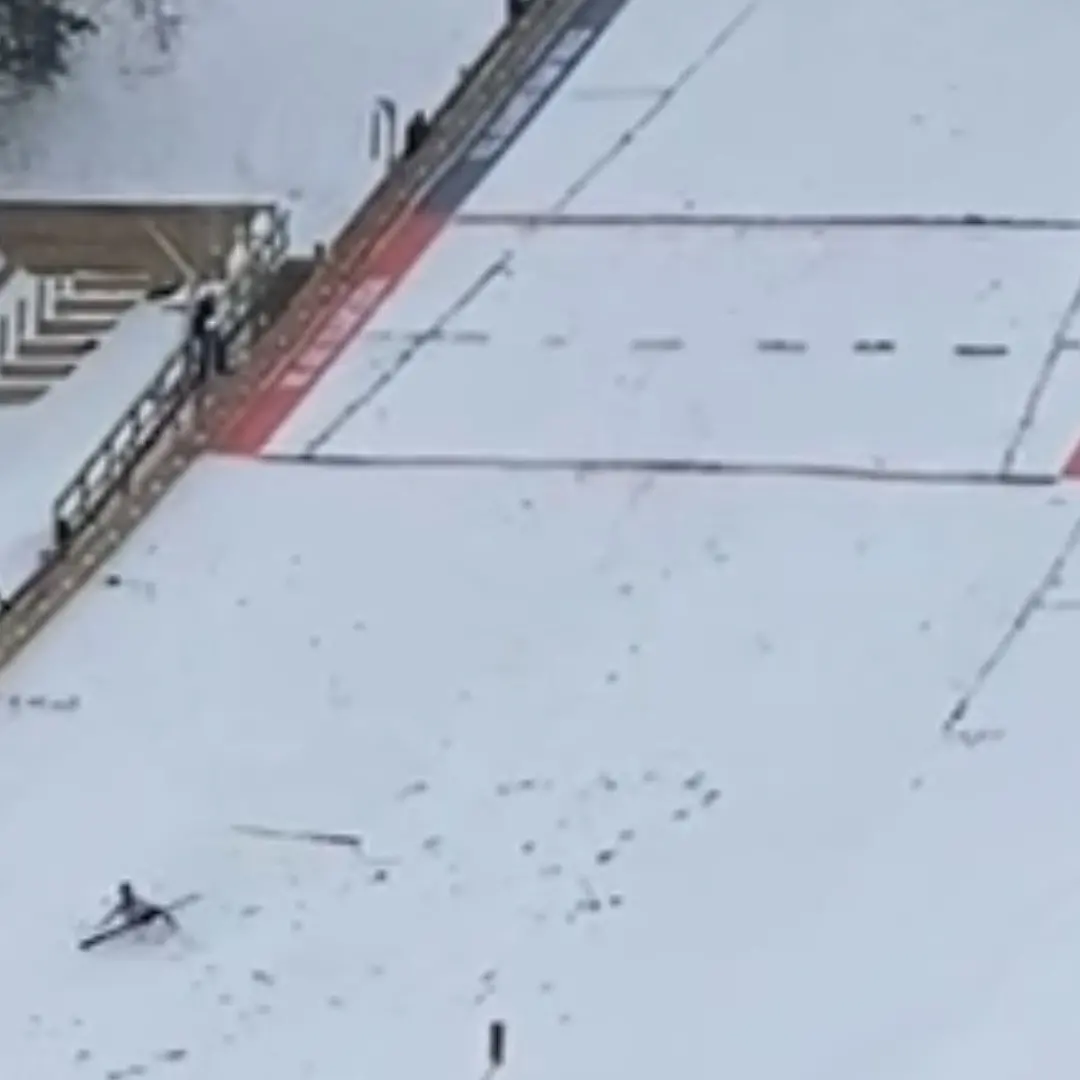 If I remember correctly, I was the first forejumper of three to kick off the first competition round for the Men’s Special Jumping competition. I got my suit zipped, skis on, helmet buckle clicked, and when the light turned yellow I made my way out onto the bar. Waiting for the green light and the coach’s flag, I gave myself an exhale, and lowered myself off the bar and onto the ice tracks below, letting me pick up speed to around 88 km/hr. I hit the takeoff fine, and glided through the air as best I could, going a humble 70 meters or so. That bit wasn’t the issue. I’ve taken plenty of spills resulting from “tipping in”, or falling out of the air over the years, and have walked away from those mishaps. This time, I didn’t have to worry about that. I landed with a solid telemark. What I did have to worry about was what happened after landing. I hit a ridge in the snow, which made my right ski get a little too wide on me, causing me to twist sideways while still skiing straight down the hill. Looking back on it, if I had just fallen over and taken the bruised shoulder, I probably could have avoided major injury, but knowing that hindsight is 20/20, there’s not much I could have done to fight the reflexes to save the landing. My issue was that I fought falling for too long, I tried to recover myself most of the way down the hill, and when I finally fell on top of my ski, all of my weight plus the angle of the hill flattening out went straight down onto my left foot.

Initially it seemed like it wasn’t too bad. I picked up my skis and walked off the hill, limping slightly. I was more concerned about my left elbow, which felt similarly numb to an injury I had in my right elbow two years before, resulting in an ulnar nerve displacement. Luckily this time it wasn’t more than a bruise, and the only visible damage was a small cut on my arm from the zipper. Realizing that once I had taken my foot out of the jump boot it wouldn’t fit back inside, coupled with the fact that I could no longer lift my big toe up when taking steps, I figured that it would probably be a good idea if I didn’t forejump the second round of competition. I spent the next few days doing a combination of icing, minor compression, and hoping that the swelling would go down so that I could compete in the US Cup and Jr. World Trials competition taking place in a few days.

When it came time for that competition, my foot was still bruised, it hadn’t gotten any less swollen, and it wasn’t any easier to walk than it was before. I could walk okay and it wasn’t painful, but I no longer had any kind of dorsiflexion to bring my toes up. After some thinking, I decided to cut my losses and not compete, hoping to catch the final Junior Worlds Qualifier later in the season. I headed home to Marquette, MI, to begin the process of getting my foot evaluated and figuring out what exactly was wrong with it. The next few weeks were kind of a blur; I was initially told that the X-rays showed “nothing broken”, then by an orthopedic that it might be fixed by wearing a boot and limiting mobility, and next after an MRI being told that in fact, I had a Lisfranc Displacement Fracture. For those of you who are like I was and have absolutely no idea what a Lisfranc injury is, it’s no surprise. It is much more prevalent in football players (and horseback riders who dismount improperly) than in skiers. It consists of dislocation or tearing of one or more of the main metatarsal ligaments that hold the bones together in the forefoot. It’s an injury that needs to be fixed with surgery, as it will never fully heal on its own, and if I had left it alone, there would be no chance of me skiing or jumping again. So I knew what had to be done: sacrifice the rest of my season, and most of the next summer for the 6 month recovery from the surgery. 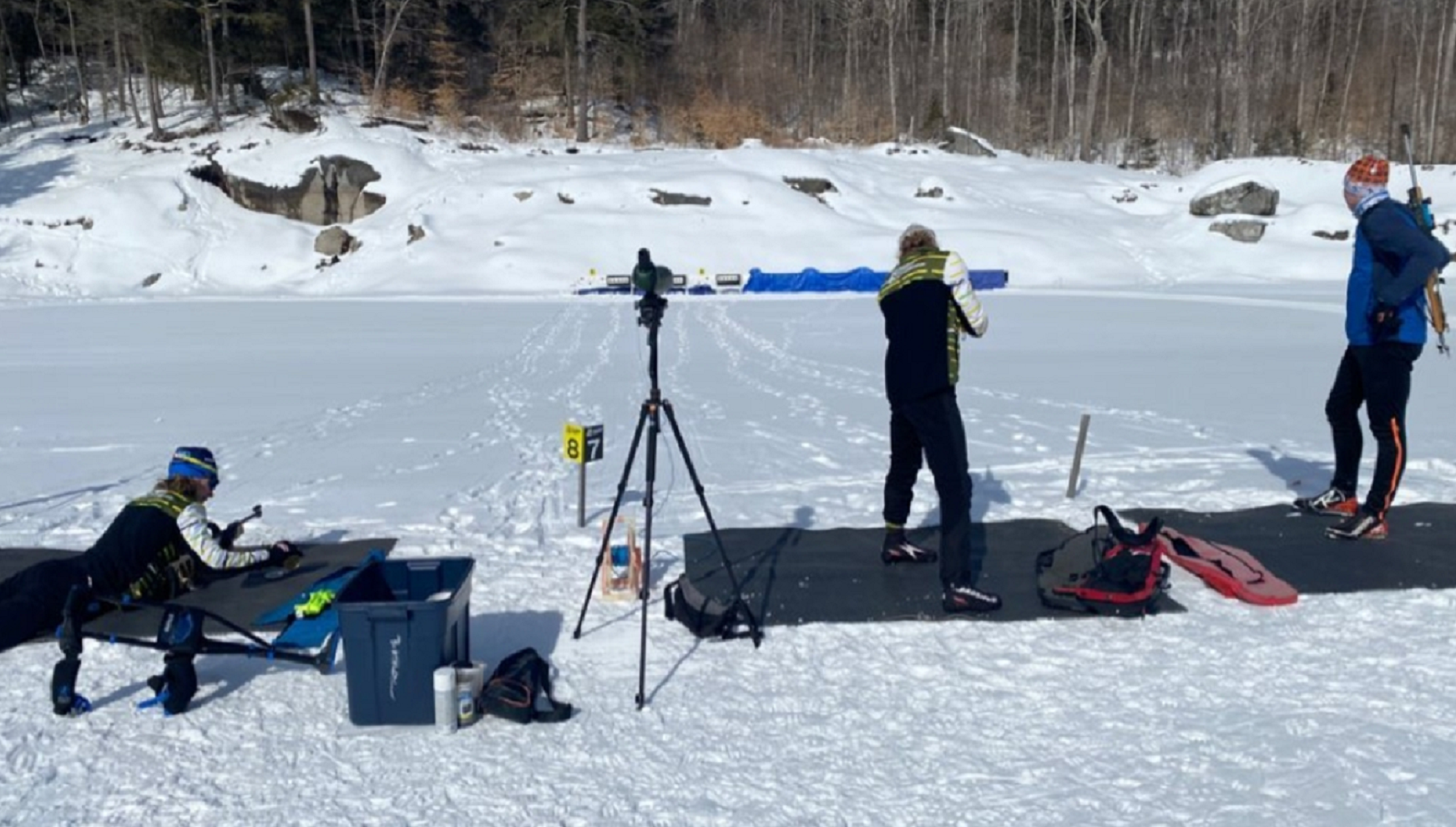 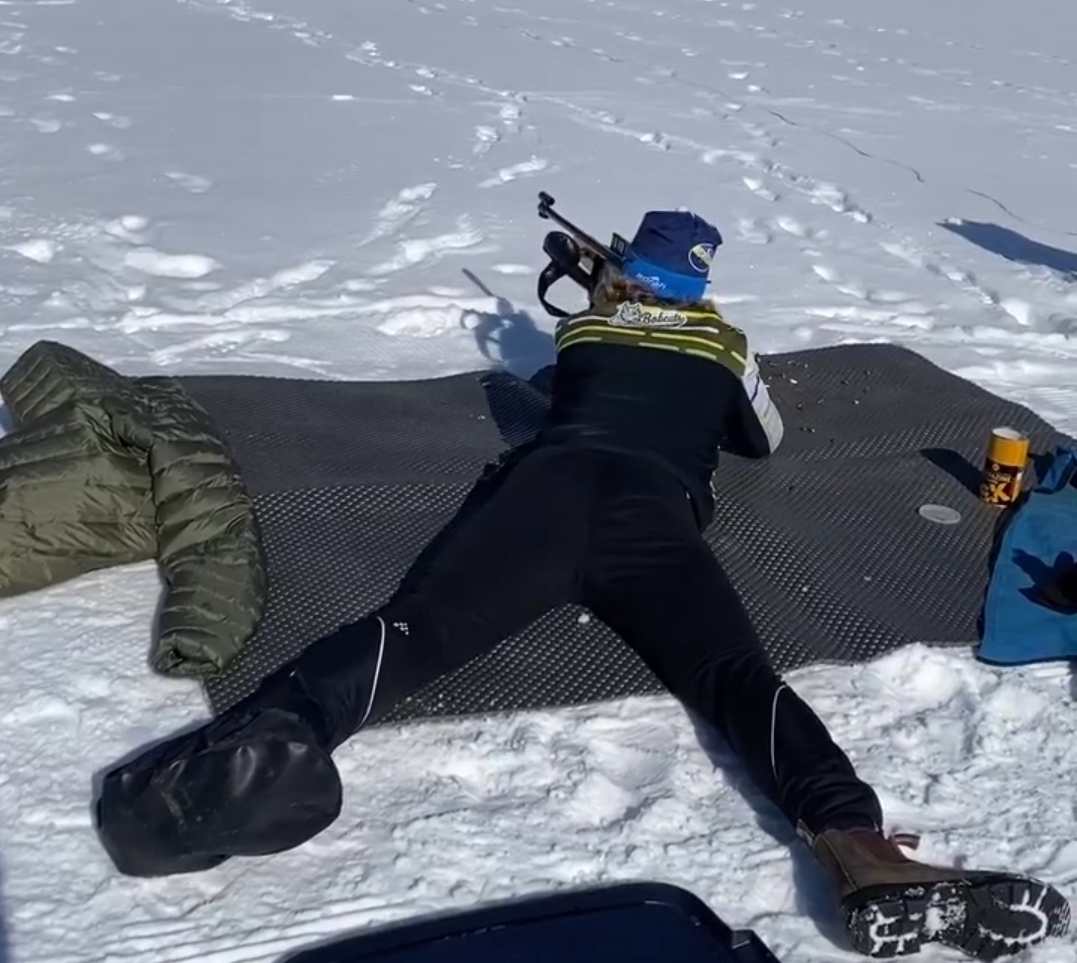 Add in another few weeks of frantically calling around to many different orthopedic surgeons, offices, and specialists. One surgeon who specializes in sports injuries is based in Lake Placid, 30 minutes away from my school, but he went to Beijing for the Olympics before I could get into the operating room with him. Other specialists had the experience but didn’t have the time or just didn’t respond. While we were figuring this out, the spring semester started, and I got to do online classes for the first few weeks of the semester. As a last-ditch effort, we looked at some doctors in the Boston area, partially because of family there that I could stay with pre- and post-operation, and it was only 5 hours away from school, instead of the 20 hour drive from Michigan. It turns out that we found a surgeon with extensive experience working with elite and professional athletes. He understood my wish for the best possible outcome and recovery, and he has the talent to realign my bones and torn ligament, allowing my body to take over and do the rest of the work by regrowing bone and healing. He also has the team to assist with the post-surgery recovery.

Finally, nearly 6 weeks after injuring myself, I made my way into the operating room on Thursday, Feb. 3 to get my foot fixed. Everything went smoothly, and a few days later I was back at school, where I could cheer on my teammates as they skied their way through a successful season. I’ve recently been able to crutch my way to in-person classes for the first time this semester, and I’m looking forward to next week when I get my stitches out, dressings off, and a removable hard cast on. I’m especially excited for that because it means that I get to begin doing core and upper body workouts, which will be really nice after not being allowed to sweat in my current dressings for nearly three weeks.

It's disappointing to start my season off well in mid-December and then see so much of my last U20 season go to waste, and I would love nothing more than to be able to go for a nice easy ski or take a few training jumps right now. But I know that in the long run, I’ll be able to come back stronger and with a hotter flame pushing me to become better at the sport of Nordic combined that I so love. And hey, in the meantime, I’ve gotten to try my hand at the shooting side of biathlon at the Paul Smith’s College biathlon range, so I can’t complain too much there. As my coach Matt Dougherty put it, now is the time to make the lemonade from what I’ve been given! And I intend to do my best.