EnjoyWinter exists to help you glide through winter.

Without ski equipment, snow is something you shovel.

With ski equipment, snow is something you glide on.

Wouldn’t you rather glide than shovel? 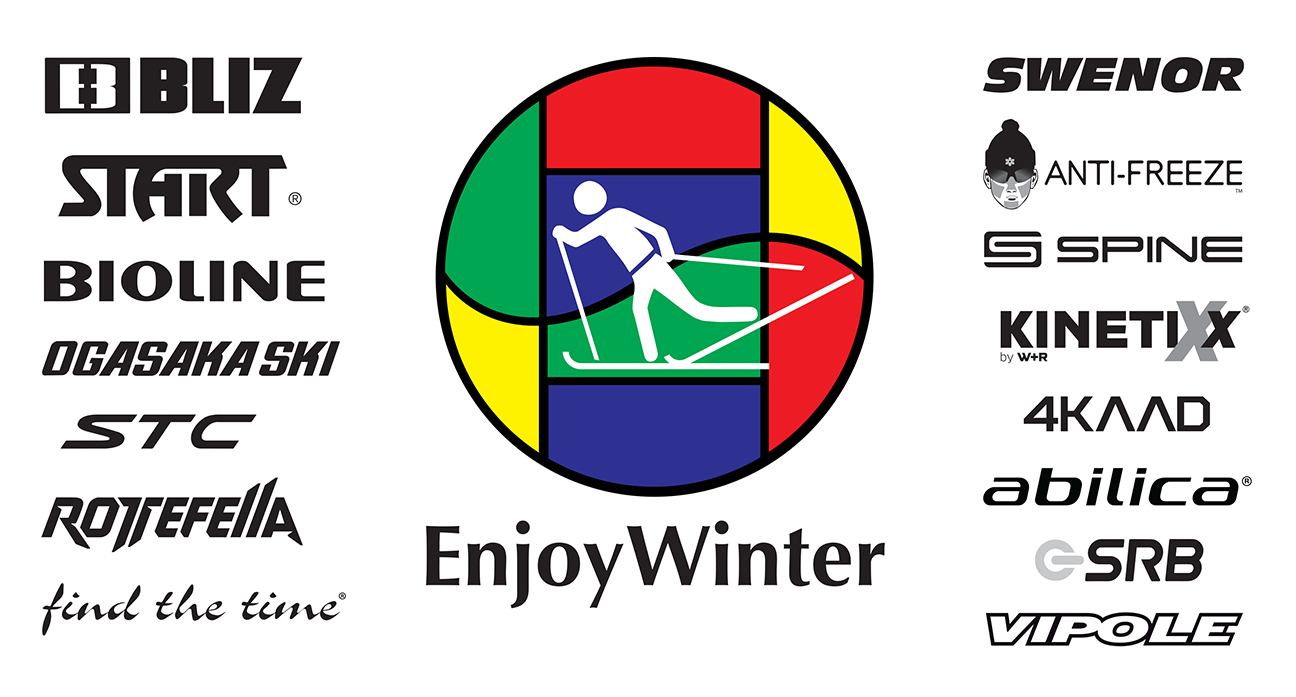 EnjoyWinter.com is the America’s largest independent importer and distributor of cross-country skiing equipment. We have curated over a dozen brands that are specialists in one product category including skis, boots, poles, eyewear, gloves, wax, rollerskis…As importantly, most of our brands manufacture their product in their own factories. Such category specialists that make their own gear are rare beasts in today’s world dominated by generalist brands that rely on outsourced contract manufacturing. This specialization and in-house manufacturing allow our brands to create what we feel are the best products for our sport the world has to offer. When browsing through our mission driven webstore, you will find Bliz eyewear, KinetiXx gloves, Start wax, Swenor rollerskis, Spine boots, 4KAAD poles, Vipole adjustable poles, Ogasaka skis and much more. This makes EnjoyWinter the direct from the manufacturer source for all the equipment and education you need to fuel your cross-country skiing lifestyle!

EnjoyWinter is based in Madison, WI and distributed among 200 retailers nationwide.

EnjoyWinter/EnjoySummer, also known as Endurance Enterprises Inc., is owned by Andrew Gerlach. We are a small business that has transformed itself since its inception in Bozeman, MT in 1993. It started out as a mountain bike race event company. In 1996 it founded the Factory Team, which during its 15 year lifespan became the world’s premier professional cross country ski (trade) team. After the 2010 Winter Olympics, where Andy discovered Bliz, Endurance Enterprises moved to Ketchum, Idaho and reinvented itself as an import and distribution company with Bliz and soon Start, Swenor and then its own brand Anti-Freeze. In 2018 it moved to the Madison, WI to be more centrally located.  We rebranded ourself with the Factory Team domain name EnjoyWinter because enjoying winter and enjoying summer is what we are about and what our brands and products help one do.

Our employees created and joined this company because they love to Enjoy Winter and Enjoy Summer by practicing their sports with passion. Our employees and ambassadors have been and continue to be some of the nation’s best nordic and alpine skiers, cyclists and runners. We/they know about quality products because we live the products. We only offer products that we use ourselves!

Learn more about our team: 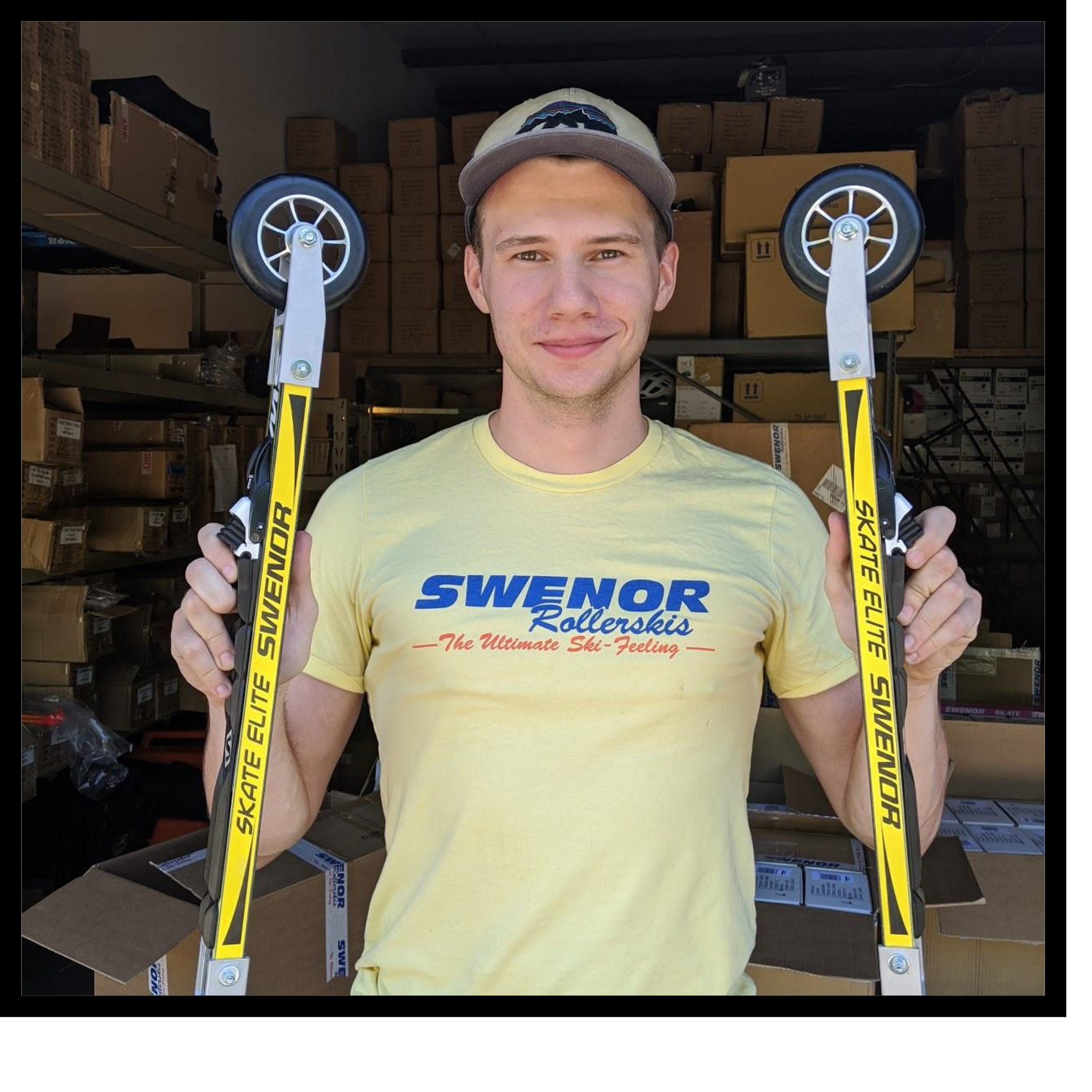 Jacob is our Sales Manager at Enjoywinter.com, representing Bliz Eyewear, Bioline Shoes, Start Ski Wax, Swenor Rollerskis, and Anti-Freeze Team Apparel. He grew up in Portland, Oregon, and cultivated a love for the outdoors from a young age. Jacob went on to study Economics at the University of Wisconsin - Madison, and was involved with the Nordic Skiing and Cycling teams on campus. His work involves coordinating with our regional representatives, sponsored athletes, and retailers to get them what they need to be successful. Other than that, he's also the web architect for enjoywinter.com, the resident wax-nerd at the office, and occasionally writes articles for skipost. Outside the office you'll find him coaching ski practice with MadNorSki, paddleboarding on the lake, or riding one of his bikes. 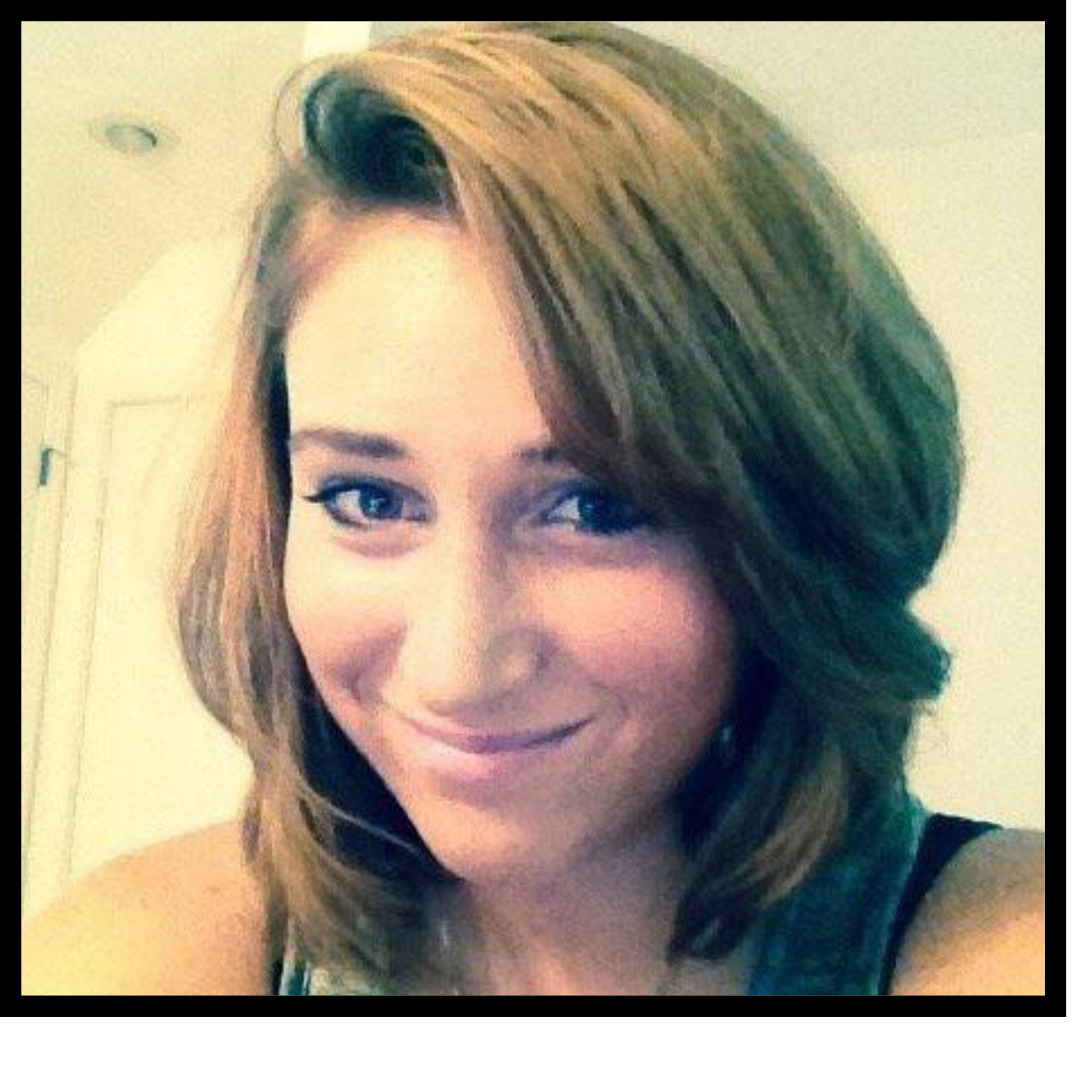 Karmen is our Marketing Director & SkiPost Editor at EnjoyWinter. Hailing from Southern Vermont, Karmen spent her formative ski-years at Prospect Mountain Ski Area (of which her parents owned and operated for over 30 years) and Stratton Mtn. School. Karmen later walked away from Northern Michigan University with 4 years of NCAA skiing, a MS in Exercise Physiology and her massage therapy license. For the past ten years she has been coach development training, athletic training and coaching juniors professionally throughout the Midwest before settling into her budding Michigan farm with husband and son. Karmen enjoys freelancing as an Exercise Physiologist, mountain biking, trail running, all the water sports, and of course, all types of skiing from her home on Lake Superior in Marquette MI. 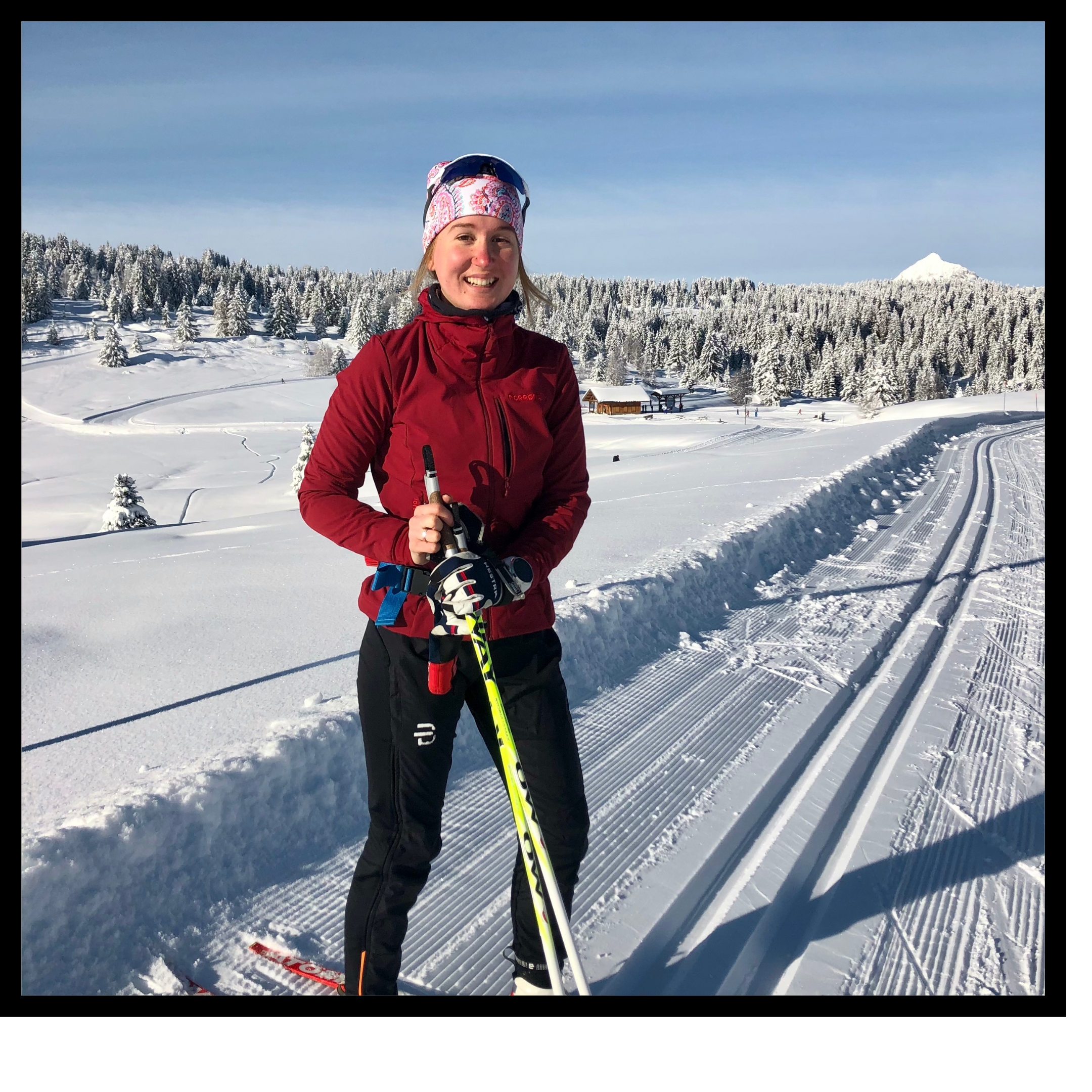 Ella grew up in the Methow Valley in north-central Washington, gaining a love for all things winter at an early age. Ella went on to attend Dartmouth College and compete on the eastern collegiate ski circuit. Since graduating, Ella has lived in France while teaching English, worked as a World Cup reporter for FasterSkier, and currently attends graduate school at the University of Montana in Missoula. When she’s not looking at Instagram or doing schoolwork Ella enjoys running, baking cookies, reading, and of course, skiing.

Andrew Gerlach is the director of EnjoyWinter/EnjoySummer and its parent company Endurance Enterprises Inc.

Andy grew up in Blaine, MN where he started cross country skiing out his back door in 1972 on wooden skis with his family. Joining his high school’s ski team presented the first time he skied on groomed trails and “fiberglass” skis. High school coach, Jim Rosenkranz, inspired Andy to enjoy racing as an excuse to train. After a brief stint at the University in Minnesota, Andy transferred to Montana State University after being recruited by then assistant coach Brain Knutson, who had been Andy’s high school assistant coach. At MSU, Andy continued his Mechanical Engineering studies while racing on the MSU Ski Team as solid, but never stellar, athlete. After graduation in 1987 with an engineering degree and working knowledge of the German language he traveled to Europe in an attempt to land a position with a ski factory. When no job offer presented itself, he returned to Bozeman and enrolled in the MSU’s Masters in Applied Economics program as a cover story to continue over-exercising in the mountains he had fallen in love with. Andy continued racing again as a solid, but never stellar, national level athlete in running, mtn biking & nordic skiing. While completing his Master’s Thesis on the Price Theory of Ski Lift Ticket Pricing, Dan Simoneau, hired him to manage Fischer‘s marathon ski team for a season. At the end of the season, in spring 1992 with a Master’s degree in-hand, and not wanting to move to Brewster NY to work within Fischer America, Andy decided to get a “real job” as an investment banker. During the next couple of years’ as an Investment Banker he help raise funds for some Montana biotech startups by day, while continuing over exercising and racing. In 1993 he quit brokering to start Endurance Enterprises.

Endurance Enterprises’ first projects were creating Montana’s PORC Mountain Bike series and writing Montana’s first guide book of mountain bike trails in the summer while continuing as a consultant and wax tech for Fischer. In 1994 he was hired to manage Fischer’s marathon team once again. In 1995 he developed that program into Team Fischer Pearl Izumi Swix and in 1996 Endurance Enterprises assumed ownership of the team from Fischer. He soon rebranded the team as the Factory Team (Fischer Salomon Pearl Izumi Swix - Factory Team) to create a branded ski team that could change title sponsors without losing its identity. In 2000 Subaru signed on as title sponsor of the Subaru Factory Team and the team became the largest professional ski team in the world, with 10-15 professional athletes annually, international wax techs and additional support staff. The team brought many innovations into the sport including mobile wax rooms, belly button uniform logo placement, and the highest paid and best supported cross-country skiers America had ever seen. In 2008 Saab was its exciting new title sponsor. But when the financial crises hit in 2009 it forced Saab to close its doors and thus end its sponsorship. 2009 was not a time to find a new title sponsor so Andy closed the Factory Team. During its 15 year lifespan, the Factory Team placed over 20 athletes on the U.S. Olympic Teams while winning more than 500 races, 50 national titles and 5 American Birkebeiner races. Unsure what to do next and looking for a change Andy moved his family, and the remains of the business to Ketchum, Idaho. Salomon global in France continued to find value in Andrew’s nordic insight and had him work as a marketing and product development consultant. Start ski wax in Finland found a similar role as did the NCCSEF. While working for Salomon at the 2010 Winter Olympics Andy discovered Bliz eyewear while stretching the soon to be gold medal winning boots for Sweden’s World Cup star Marcus Hellner. Soon thereafter Andy reached out to Bliz global in Sweden and persuaded them to allow Endurance Enterprise Inc. to be its U.S. distributor. In November 2010 and down to a few dollars remaining in its bank account Endurance Enterprises Inc. the importer and distributor company, of 1, was reborn with is first small shipment of Bliz. In 2012 Start was added, and in 2014 Swenor was added. In 2015 Andy created Anti-Freeze Face Tape and in so doing the Anti-Freeze brand. In 2017 he created Anti-Freeze SuperPuff jacket. In the summer of 2018 Andy moved the business and his family to Madison WI to locate the company more centrally. Since that time Endurance Enterprises Inc. has been able to bring on more staff and continue its growth. In the summer of 2020 Andy discovered the Bioline shoes brand and singed on to be its importer and distributor. During the Covid spring and summer of 2020, Andy, like many others, has been pleased to find the time to regain some fitness and rediscover his joy of exercise and exploration of his community by bike and foot.